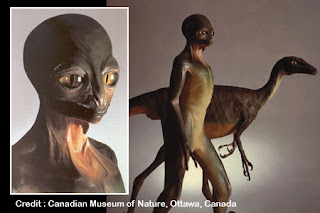 It seems the reason Russell's Troodontid was such a big deal at the time is because Russell himself was a pretty big deal at the time. He was a curator. As a consequence, his evolved Troodon received quite a bit of attention. It was the first time the concept of an evolved dinosaur of any kind carried with it any sense of scientific legitimacy. Scrutinized as it was, it was a major victory for Dinosauroidia Enthusiasts everywhere. In fact we all got together and high-fived that day and had such a party. If you missed it, what can I tell you? Make it your bee's wax to be there next time, poindexter.

Personally, I give Russell plenty of flack for all of his Troodontid's flaws. Mostly because I am not a scientist-- I am merely an enthusiast and I'm down with any Troodon at all, let alone one that can stand-up straight. But also because Russell was breaking new-ground at a time when the public was just beginning to accustom itself to a new brand of dinosaur. Robert Bakker's sort-of revolutionary Dinosaur Heresies wasn't published until 1986 so the idea of dinosaurs as lumbering, slow, cold-blooded dolts was still very prevalent at the time. In fact, so was Hall & Oates, so just let that sink in for a bit. Is it true that their #1 hit Maneater (coincidentally also released in 1982) was actually about an evolved and sentient Troodon that ate a man? Nope, probably not even close to being about that.

In fact the title of Russell's original article,  "Reconstruction of the small Cretaceous theropod Stenonychosaurus inequalis and a hypothetical dinosauroid," shows us exactly how dated the idea is at this point, in that the name 'Stenonychosaurus' has long been abandoned. Fortunately it was abandoned in favor of the far more phonetically-pleasing and awesome-sounding "Troodon."

The ex-Stenonychosauroid even has it's own wikipedia entry.

In 1982, Dale Russell, then curator of vertebrate fossils at the National Museum of Canada in Ottawa, conjectured a possible evolutionary path that might have been taken by Troodon had it not perished in the K/T extinction event 65 million years ago, suggesting that it could have evolved into intelligent beings similar in body plan to humans. Over geologic time, Russell noted that there had been a steady increase in the encephalization quotient or EQ (the relative brain weight when compared to other species with the same body weight) among the dinosaurs.[27] Russell had discovered the first Troodontid skull, and noted that, while its EQ was low compared to humans, it was six times higher than that of other dinosaurs. If the trend in Troodon evolution had continued to the present, its brain case could by now measure 1,100 cm3; comparable to that of a human. Troodontids had semi-manipulative fingers, able to grasp and hold objects to a certain degree, and binocular vision.[11]

Russell proposed that this "Dinosauroid", like most dinosaurs of the troodontid family, would have had large eyes and three fingers on each hand, one of which would have been partially opposed. As with most modern reptiles (and birds), he conceived of its genitalia as internal. Russell speculated that it would have required a navel, as a placenta aids the development of a large brain case. However, it would not have possessed mammary glands, and would have fed its young, as some birds do, on regurgitated food. He speculated that its language would have sounded somewhat like bird song.[11][28]

Russell's thought experiment has been met with criticism from other paleontologists since the 1980s, many of whom point out that his Dinosauroid is overly anthropomorphic. Gregory S. Paul (1988) and Thomas R. Holtz, Jr., consider it "suspiciously human" (Paul, 1988) and Darren Naish has argued that a large-brained, highly intelligent troodontid would retain a more standard theropod body plan, with a horizontal posture and long tail, and would probably manipulate objects with the snout and feet in the manner of a bird, rather than with human-like "hands".[28]

These days most of the criticism of Russell's creation is it's obvious anthropomorphically-biased design.  And in truth, many of it's human-like features seem to irritate and poke at one's more rational senses, the way an anthropologically-biased Vulcan or Klingon might irritate the sci-fi fan (which it does, don't get me started). And you can dabble with explanations of convergence and what not if you want. Really, I won't stop you.

But the Stenonychosauroid in my mind was nothing worth getting riled-up over. It was little more than what Russell described as a "thought experiment," which was simultaneously capable of introducing us to new ideas as much as it was just straight-up fun.
Posted by J. Gentile at 5:48 PM