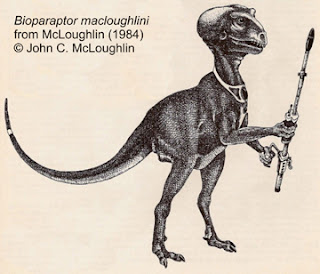 The Bioraptor was the creation of John C. McLoughlin. It first appeared in the article  'Evolutionary bioparanoia', published in Animal Kingdom magazine back in 1984. I came to this via the excellent Tetrapod Zoology blog by Darren Naish in March of 2008. The image above and the taxonomy therein were taken from Naish, who over the years has dealt with the topic of sophont dinosauroids a number of times, if not always reluctantly as it would seem.

Naish describes Bioraptor as depicted to the reader by Mclaughlin as

"a swell-headed deinonychosaur that wears jewellery and has invented nuclear weapons, Bioparaptor recalls Russell's dinosauroid in having a short-jawed, big-brained skull and in having lost its pedal sickle-claw, but differs from it in being long-tailed and overall more dinosaur-like."

There seems to be little hope of tracking down the back issue containing this article, so Naish is all we have to go on for the Bioraptor, but I have to admit I was instantly a fan.

Bioraptor was born in 1984, only 2 years after Russell's much more anthropologically-biased version of an advanced maniraptoran, and yet it remains much more true to it's roots. The Bioraptor is somewhat more 'upright' than what we find in the fossil record, but shares the enlarged skull to house the evolved brain. The arms have grown a bit to fashion and wield some crazy kinda weapon, in lieu of the hyper-extended sickle-claw.

Sadly, we are informed that this Bioraptor destroyed itself, and the rest of it's society:


Its nefarious activities not only resulted in a nuclear conflict that caused the end-Cretaceous event, but its domestication of herding cattle-like herbivores (Triceratops and kin) resulted in an impoverished terrestrial fauna where other big animals were rare or absent.

This is, as we will find, a common theme in Dinosauroidia, that is, that the advanced dinosauroids initiated a nuclear apocalypse as the true nature of the K-T extinction event. The idea is fascinating, though not at all meant to be taken literally or seriously. But it should be noted that the rise and fall of a civilization could potentially take place within a few mere thousands of years, and after a duration of 65 million years all evidence of which would long be eviscerated by ice ages, erosion and Father Time's cruel hand.
Posted by J. Gentile at 7:01 PM