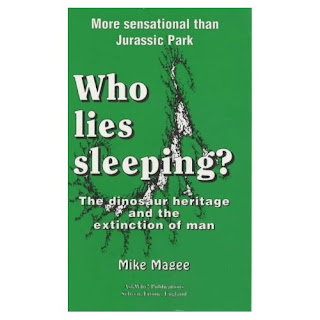 Dale Russell's dinosauroid was so controversial in part because it was the first time a respected man of science designed a model for speculative dinosaur evolution. The sort of backlash he endured from his own peers ensured that subsequent attempts at such speculation were abandoned from fear, and left solely to the sci-fi writer and the more adventurous paleo-artist. Mike Magee, however, in his book Who Lies Sleeping? The dinosaur heritage and the extinction of man, has no reservations about speculating about the existence of a sentient dinosaur, in fact he insists they did exist, and that they ultimately destroyed themselves much in the same fashion that mankind ultimately will.

Naturally, several times throughout the book, I had to stop and really think, "is this guy for real?" And in the 'About the Author' section we find that Magee "attempts to dull his fervid imagination with the local cider, and though he quite often succeeds, he does not blame it for this book". So, naturally, I instantly warmed up to the man. The book is never tongue-in-cheek, but is clearly the product of a rational and thoughtful man from Leeds, who just so happens to think dinosaurs developed nuclear power.

The arguments in the book are often informed and reasonable, and were obviously researched a great deal. That is not to say that the conclusions are not stretched and sensational, but Magee makes a sensational argument near-plausible, without ever crossing into sheer raving lunacy. The result is a fascinating and awesome read.

I have to admit, I don't really care for the humans are destroying themselves motif at this point; I am just sort of bored with humans. And the parts about the dinosauroid psyche echoing in our subconscious, I just rifled right through those. So it's possible I'm giving the other too much credit. But I was mainly looking to jump right ahead to the Anthroposaurs, so I warp zoned all the way to Chapter 9, the one titled "Anthroposaurus Sapiens". This is the point when Magee really gets down to business; Second sentence, second paragraph:


Some dinosaurs did develop intelligence and by doing so caused the Cretaceous terminal extinction.

Boom. Yup. No messin' around. What follows comes the a series of explanations for the evolution of such a dinosaur that, more often than not, are based on the fact that they can not be proven otherwise.

He starts by saying that when we look back on dinosaurs (and I believe he's mainly dealing with deinonychosauridae here), brain:body ratio as an indicator of intelligence may not be all that it's cracked up to be. And that in dinosaurs, "a higher metabolic rate, more active brains, faster synapses, sharper nerve impulses, could all contribute to greater efficiency of the brain even though it were smaller than ours". He says perhaps dinosaur brains did not have the "redundant memory capacity" that humans do, taking up valuable, unused space. He suggests that where the ice age provided the selective pressure to assist hominids in their development of higher intelligence, the dinosaurs had rising and sinking sea levels. And then he brings it home by implying the sapient dinosaurs were forest dwelling and that therefore, there is no record of their evoluton in the fossil record. Flippin' beautiful, man.

All this is good stuff. At times he lost me, by trying to say humanoid tracks found in Mesozoic layers were in fact these evolved dinosauroids, but hey, I don't blame the guy for perusing every angle he can.

Anyway, I've only read a few chapters so far, and I'll likely edit some more details into this post later.

Unfortunately, the book is lacking in any dinosauroid art. Instead all we are offered is a lame sketch of the Russelloid, which I won't bother to pass on here. We are, however, given this unexpected gem, a Parasaurlophus and his evolved crest, which is actually an "elaborate breathing apparatus" to sift through the dinosauroid-caused pollution, just hanging out near a nuclear power plant: 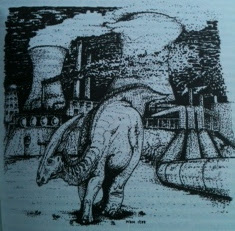 I recommend the book if you are willing to let your suspension of disbelief extend a bit for entertainment purposes. I look at it as an excellent work of hard sci-fi. You can buy it here, it's not always easy to find. Magee still runs a blog on the subject, competitively titled, "Dinosauroids", which you can find here.
Posted by J. Gentile at 11:21 AM